Zulmilena Then was one of the recipients of the 2020 American Express Aspire Award.

One day, I had a dream where I was in danger. Like in a horror movie, I screamed for help, but my voice didn’t come out. I was surprised. I tried again, but I was mute. It felt distressing and exhausting trying to use my voice to be rescued and not heard. In the waking state, this is the same feeling I felt as a Brown woman advocating preservation as a way to protect my Black and Brown childhood neighborhood of East New York from disappearing under a New York City rezoning plan.

When I testified in front of New York City officials to save our historical gems (in the name of preserving our people, community, and culture), it fell on deaf ears. In 2016, when they approved the rezoning plan without a real historical preservation agenda, it felt like a gut punch. They had recognized some historical treasures in my ‘hood,’ but they didn’t step up to protect them. They knew there were irreversible consequences a deliberate upzoning would cause.

However, when I spoke in public, my community heard me. Every time I stood up, I gained new friends, supporters, and some became members of Preserving East New York (PENY), the preservation advocacy group I founded. After our defeat by the rezoning approval, we rose to power with an educational plan to teach our community why preservation in the ‘hood’ matters. And since 2015, we’ve been connecting people to the neighborhood. We believe every block has a story beyond the negative portrayal in the media, and historic preservation allows us to change the neighborhood’s narrative. Through our advocacy and programs we show the other side of our resilient community through walking tours, workshops, and social events to celebrate people’s stories and the historic spaces that make our neighborhood unique, All of which unveils the power of preservation. 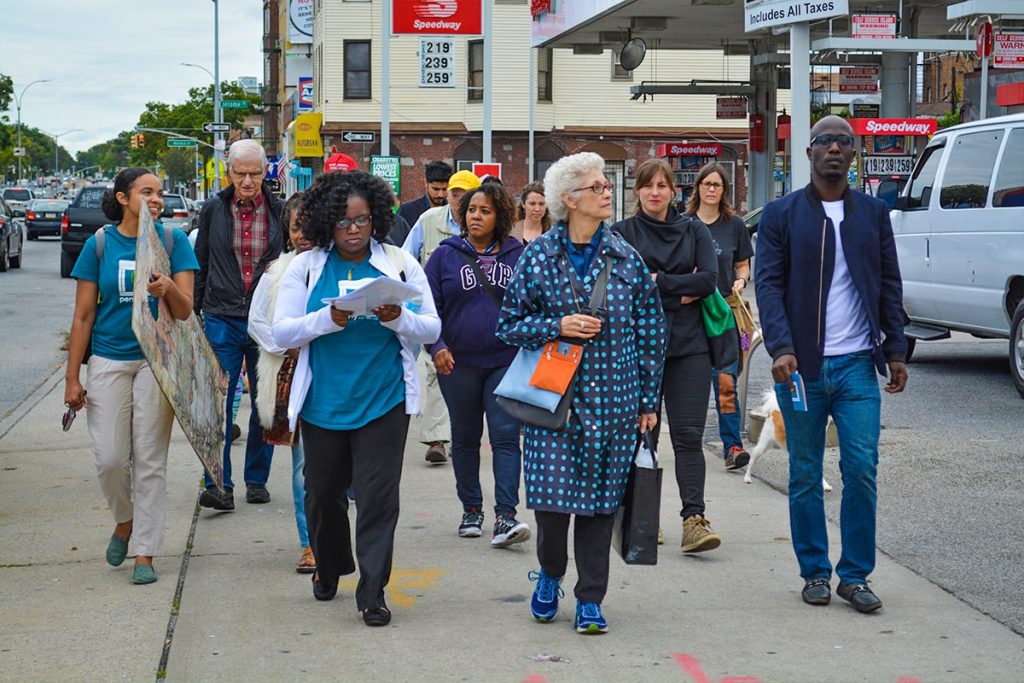 PENY, leading a walking tour of East New York in 2016. This is one way they connect visitors and residents to the neighborhood’s rich history, which is too often overlooked. | Credit: Carlos Rodriguez

While last year felt apocalyptic, the events of 2020 and the pandemic shook, shifted, and shaped the notion of how the nation should be moving forward. This past year gave some a 20/20 vision of the deep racist roots embedded within this country’s systems. It led some people, organizations, and governments to look inward and reevaluate themselves and their structures for a more just, equitable, and inclusive environment.

For the rest of us, Black and Brown, nothing has changed. The year 2020 just became a bright yellow highlighter of the struggles ever-present within our communities. As health disparities, police brutality, joblessness, homelessness, and food insecurity continuously ravaged Black and Brown neighborhoods—with the COVID-19 pandemic exacerbating these realities and reflecting the country’s structural racism—our advocacy work came to a halt. Historic preservation took a back seat as our neighborhoods’ focus shifted in addressing these major priorities for preserving our people’s lives. Before we say buildings matter, we boldly say Black Lives Matter! Because if we don’t have our people, then who are we saving the buildings for?

Read the full article at SavingPlaces.org