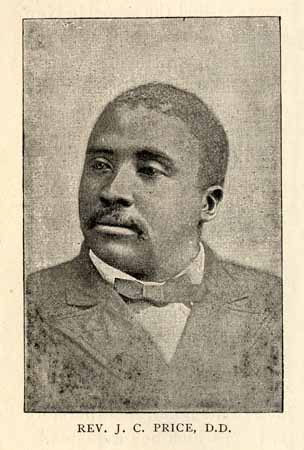 With the support of the AME Zion Church and the support of Salisbury residents, Dr. Price established Livingstone College and become its president in October 1882, when he was twenty-eight years old. (Originally called Zion Wesley College, its name was changed to that of the African explorer and missionary David Livingstone in 1885.)

Price’s activist role in civil rights and black education ended abruptly in 1893, when he contracted and died of Bright’s disease at age thirty-nine. He was buried on the campus of Livingstone College. W. E. B. Du Bois, August Meier, and others felt that it was the leadership vacuum created by Price’s death into which Booker T. Washington moved, and that had he lived, the influence and reputation of Price and of Livingstone College would have been as great or greater than that achieved by Washington and Tuskegee.

Learn more about the amazing life of Rev. J.C Price, D.D, at  www.ncpedia.org/biography/price-joseph-charles

Price’s leadership of the college and his ability as an orator gained him national attention. In 1888 President Grover Cleveland asked him to serve as minister to Liberia, though he declined, saying he could do more for his people by remaining in Salisbury. In 1890 he was elected president of both the Afro-American League and the National Equal Rights Convention and named chairman of the Citizens’ Equal Rights Association. But conflict among the groups and lack of financial support led to their decline soon afterwards.

Like Booker T. Washington, Price believed that blacks’ self-help through education and economic development was their best hope for solving the race problem, and he assured whites that social integration with them was not among their goals. But he was less conciliatory than Washington in demanding that the civil rights of blacks be upheld. Blacks were willing to cooperate and live peaceably with southern whites, but not at the cost of their own freedom of constitutional guarantees. “A compromise,” he wrote, “that reverses the Declaration of Independence, nullifies the national constitution, and is contrary to the genius of this republic, ought not to be asked of any race living under the stars and stripes; and if asked, ought not to be granted.”